This release improves the user experience in several areas and the UI is less cluttered.

Back when we started adding tools that depended on WinPcap, a computer typically had one interface that WinPcap could use for receiving or sending packets. That has all changed. VPNs, Virtual Machines and secondary network interfaces can all potentially add WinPcap compatible interfaces and those interfaces all show up in the WinPcap Interface dropdown list. The problem is that prior to v11.83 you had to select the right WinPcap compatible interface or the tool did not work right and you saw a message to select the correct interface. What v11.83 brings is automatic selection of the interface based on the input you give. This applies to a number of tools in NetScanTools Pro like ARP Scanner, Ping, Traceroute and others. You will still have to select the correct interface in many of the separately launched tools like Packet Capture or Passive Discovery because those tools are listening tools rather than 'packet sending/listening' tools.

Over the past few years typical monitor sizes (pixels HxW) has radically increased. We originally designed NetScanTools Pro to accommodate monitors as low as 800x600 but I personally use a pair of 1920x1080 monitors. I reviewed our web traffic on Google Analytics and found that nobody is using 800x600 or even 1024x768 so this new version of NetScanTools Pro expands the layout of the buttons and other controls on the right side and spreads them out as a first step towards reducing clutter.

Another annoyance was the 169.254.x.x popup message that appeared on startup, usually if you had Npcap installed instead of WinPcap. The message is gone and 169.254.x.x interfaces are not included in any tool (except those that show interfaces) since they are auto-assigned IP addresses from the operating system and actually not functional.

Many other changes and they are listed below. If you have an active maintenance plan you can download 11.83 through the Help menu/Check for New Version.


-Reports now have expanded information regarding the settings used for these tools (most are in the 'Notes' section of the report): Packet Flooder, Ping - Enhanced, Ping Scanner, Port Scanner, and Traceroute.


-DHCP Server Discovery now times out quicker if the local port 68 is in use and any network adapters with the IP starting with 169.254.x.x are not shown in the list because they are inactive.


-Maintenance Plan Expiration and other startup messages that appear before the main window is active are now force to appear as the topmost window. This stops the problem of starting NetScanTools Pro and not seeing anything because a startup message window was behind another window.


-Ping Scanner now includes a right click menu option to use your web browser to connect with the selected IP address.


-Removed startup message about 169.254.x.x interfaces which shows up more frequently if Npcap is installed instead of WinPcap.


-Began the first steps of a UI improvement by expanding the area used by the tools in the right hand panel. Our research shows that most displays are now wide enough for us to de-clutter the right hand side by making it wider and moving controls.


-SNMP and SNMP Advanced: default bulk reps is now 8. Suggest lowering to 8 if you are using SNMPv2c or SNMPv3.

Version 2.77.1 followed closely behind the release of 2.77. This minor release adds serial and model retrieval from Adtran switches. It also fixes some minor issues with importing devices from a text file in Switch List editor. SQLite was updated as well.

Managed Switch Port Mapping Tool v2.77 adds several features to enhance the user experience plus new features including one that has been requested a number of times for several years.


One of the most requested features (for years) is this: a way to compare two mappings of the same switch to see what has changed. It is now there under Review History (left control panel): 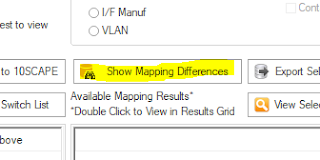 Select at mapping from the left list, then select one from the right list. Press ‘Show Added & Removed’ to see a list of what is present only in the first mapping (green) and the second mapping (blue) as shown below. 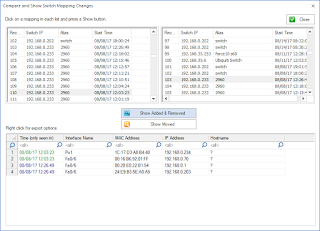 To see a list of devices moved from one port to another between mappings, press Show Moved. The final port that the device was moved to is shown in the list. 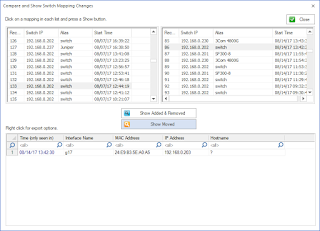 Another major addition is the ‘Test’ button. You can find it in the device settings. It give you a way to see if the device (switch or router or other) can be pinged and communicated with using the SNMP settings you have entered. See below: 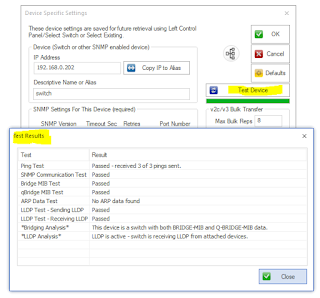 Do you have Juniper, Ubiquiti and Force10 switches? We improved support for those switches and we even found that some models of Adtran switches can be mapped – but not all.

-Added button in Review History for comparing and displaying the differences between two mappings of the same switch at different times. One selection shows the difference between information present on the first switch mapping vs the second switch mapping. The other selection shows movement of a device from one port to a new port. The results of the comparisons may be saved/exported/printed.


-Added Test button to Device Settings. Use it to verify the device is reachable with Ping and verify your SNMP settings are correct. It also can tell you if it is a switch or a different kind of SNMP enabled device.


-The target switch is now tested near the start of the mapping to see if it really is a switch, if not a 'do you want to continue' question is asked.


-Additional sources of warning messages during SNMP single parameter retrievals were identified and the warning suppressed. The warnings were sometimes interpreted by users as errors and slowed the mapping process.


-Improved export to 10SCAPE. If required columns are missing, a warning is now shown at export.


-Framework: menu and toolbar are now fixed in place and not dockable.


-Framework: top titlebar is now correctly updated to show the switch info when the mapping is complete.


-Some models of Adtran switches are now supported.


-Juniper switches now show the vlan name, internal vlan number and vlan tag as follows with the tag in curly braces: MYVLAN(5){100}. Other switch brands will continue to show MYLAN(5) or 5 where 5 is the vlan number.


-In order to speed up the switch list mapping process, the column widths are no longer automatically resized in list mode.


-Fixed SQL syntax problem in lldpLocChassisId when subtypes 1-7 are present.


-Fixed usability problem with device settings editor where selections from existing community names would not appear to 'stick'.


-Fixed XML export where switch information is added in the left column.


Download the ‘installed’ version 2.77 from SwitchPortMapper.com and install it over the top of your current installed version.


version users need to use the Help Menu/Check for Update selection to obtain the upgrade patch.
Posted by Kirk Thomas at 11:03 AM No comments: