Our August Newsletter is ready. It talks about the recent releases and we mention the upcoming Managed Switch Port Mapping Tool 2.54 and NetScanTools Pro 11.72. Those will be done very soon.

Have a great end of summer!

Posted by Kirk Thomas at 9:37 AM No comments:

Email ThisBlogThis!Share to TwitterShare to FacebookShare to Pinterest
Labels: newsletter

Windows 10 Pro retail release on a 9 year old laptop? yes. It can be done. But it wasn't easy.

Where I started from:
The Inspiron 1520 has 4GB ram, a 2Ghz Core2 Duo, a SanDisk Ultra II SSD and it had 32 bit Windows 7 which was an upgrade from the original Vista 32.  I cloned the SSD to another hard drive before getting started. I used a Windows 10 32 bit ISO burned to a DVD. For tries 1 and 2, I used WiFi to access the internet.

1st try - everything seemed to go well, I let it download updates to the install. But then it got to the first reboot. It hung on the light blue window logo with the spinning dots. After half an hour I manually rebooted it and it gave this message "0xC1900101 - 0x20017 The installation failed in the SAFE_OS phase with an error during BOOT operation". Windows 7 was back, so I tried again.

2nd try - similar to the first (I allowed updates). The reboot phase was different this time - no logo with spinning dots. There was a cursor. Window 7 did come back to life.

So I did some fruitless research and found that the error message might be related to a driver. So I did things differently on the third and final try.

3rd try - this time I flipped the switch that turned off WiFi, plugged in an Ethernet cable (for Windows activation) and Bluetooth and I told the installer not update before installing. It worked. After the first reboot I got the large circle showing upgrade progress. Then finally I got to "Hi there, welcome back!" and finished the upgrade. But I wasn't done - read on.

Windows 10 was showing the desktop in 1024x768 mode instead of the native 1440x900. Display settings would not allow me to go that high, so I unplugged the Ethernet cable and switched on WiFi. Then I downloaded the updates. After rebooting the NVidia driver was active and gave me the option to go to 1440x900.

Next, I started going through apps to check compatibility. NetScanTools Pro, the Managed Switch Port Mapping Tool and related products worked normally as did iTunes and Office 2007. But SanDisk SSD Dashboard 1.4.1 hung on startup and consumed 98% of CPU time no matter what I did. Obviously SanDisk has some work to do.

Later I went into the Startup tab of Task Manager to disable old unused drivers - that speeded up boot time and stopped a crash message on power down.

It wasn't easy, but I now have Windows 10 Pro 32 bit running. I would really like to get x64 running on it instead. Another time.

Here are screenshots of the System window and below it is the CPU-Z. 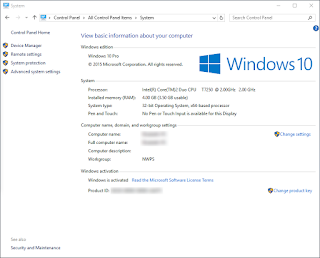 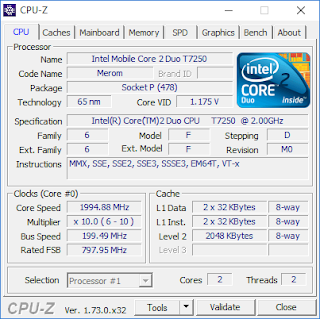 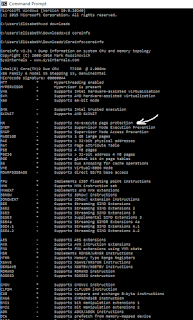